We are excited to share this; finally, the pic2card service is available on https://adaptivecards.io/designer.

Pic2Card helps the new AdpativeCard users to try out the Adaptive card generation by
merely uploading a card image. This further reduces the learning curve needed to develop
adaptive cards using the designer. AdaptiveCard Designer’s whole idea was to help the
card designers to create new cards with ease. Designer provides a WYSIWYG IDE environment
to card developers to create their cards if the template designs don’t fit their requirements.
Here is what team Imaginea wants to pitch in and make this process much easier for the new
AdaptiveCards users by simply upload a card image that you got from the internet or your
designer, upload, and right away grasp your Adaptivecards representation of it.

Go ahead and play with it, and let’s know your feedbacks via Github issues.

How to use this Feature

Pic2Card converts the image to Adaptivecards card schema. The card generated will
reproduce the image text, color, and font details from the image so that the final card
looks almost similar to the image uploaded to the pic2card service. 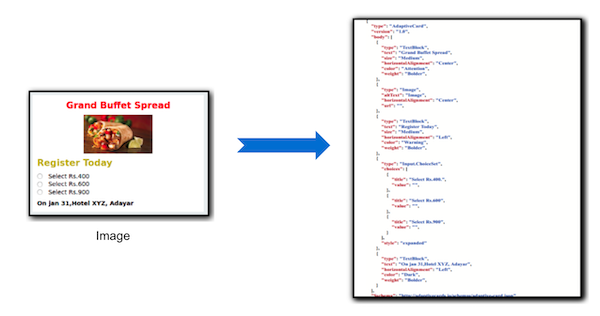 We haven’t discussed anything much about its internals till now, here it’s. We have the
state of art ML and other heuristic processing involved to recreate the card from the image.
The entire pipeline is shown below. The two main parts are, 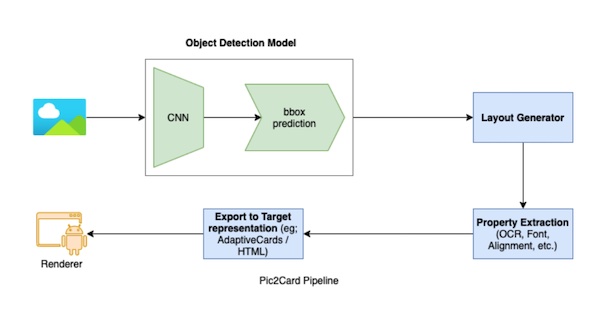 This entire pipeline is part of our backend pic2card
service, which is hosted as azure functions. The frontend part of the pic2card
integrates with the AdaptiveCards Designer.

Try the service, and Let’s know your feedback on github issues.

Break outside the box of templated cards

Find us on GitHub

Roadmap updates and an early look at Adaptive Components

v1.3 is released, and a real-world look at automating business processes with Cards and Power Automate